For latest news and offers.

According to the WHO  (World Health Organisation), in order to improve cardiorespiratory and muscular fitness, bone health, reduce the health risk of NCDs (non communicable diseases such as high blood pressure and heart disease) and depression:

For people with a sedentary job or lifestyle in general, achieving these targets is going to require a proactive approach: joining a gym or attending regular fitness classes or taking up jogging, for example.

Last year in 2016, researchers from the Norwegian School of Sports Sciences in Oslo, Norway, and the University of Cambridge in the U.K. analysed data on more than one million people drawn from 16 different studies to establish how many hours of physical activity would be needed to counteract the ill effects of sitting down all day.

It found that sitting for prolonged periods of time raised the risk of cardiovascular disease by 14 percent, cancer by 13 percent, and diabetes by a whopping 91 percent.

That all sounds very alarming, especially if you have a desk job and work a typical eight-hour day.  The good news is that you can mitigate against the ill effects of prolonged sitting by i) doing an hour of intense exercise per day and ii) getting up at regular intervals and moving around. The increased risk of death linked with sitting down for eight hours a day was near enough eliminated for people who were physically active for at least one hour a day.  What’s more, the study concluded that:

Eight-hour-a-day sitters who exercised had a significantly lower risk of death compared to people who sat for fewer hours a day but weren’t active.

Those who sat for most of the day were at the highest risk for death.

Some companies have responded to this now-known threat to our health by providing standing desks for their employees. 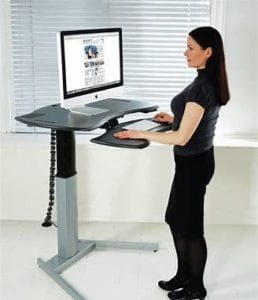 Where this isn’t an option, it is clear from the results of this study that you must get up and move around every 30 minutes as well as making exercise a priority in your week.

In fact, read the facts and figures at http://www.juststand.org/the-facts/  and you’ll never want to sit at a desk again!

Standing more can lower your risk of serious health issues ranging from cancer to early mortality.

Standing more can increase your energy and productivity levels, lower your stress and improve your mood.

Standing more can boost your metabolism, tone muscles and even reduce common aches and pains.  Plus, for every 10 minutes of standing, you’ll burn an extra 10 to 20 calories.

We know from our Bee-Fit members the health benefits of regular fitness training: we have a member who is no longer diabetic since being a member, we have an 84-year-old member with severe arthritis who continues to avoid the need for surgery by working out four times a week with us, members who no longer have knee and back pain and several members who put their improved mood and mental well-being down to their Bee-Fit Club fitness routine.

The WHO-recommended 300 minutes a week for maximum health benefit equates to five sessions a week at Bee-Fit.  But even two or three sessions (especially considering the intensity and all-round workout that we provide) will provide significant health and well-being benefits.

Stand up for your health this year and make time for fitness.